Lemaitre Demeestere is a textile company located in Halluin (North of France). It was founded by Edouard Lemaitre-Demeestere in 1835 (Mayor of Halluin). At this time the construction of factory is rare, the enterprise recognizes a few looms in small houses. New houses are built in the districts of Christ Dal , cities St. Peter and St. Paul and Pannerie to address the development of the company.This fast growing is mainly the consequence of the railway creation. This improves trade and the steam engine comes relieve human labor. We build large factories where we settle iron looms using steam engines and then electric. This increase in the number of looms and their operating speed multiply the production by 10.

Lemaitre-Demeestere bought the buildings of an old mill located on Rue du Moulin. Looms are purchased from England and make a very fine linen fabrics. This production requires highly qualified personnel : women for the winding, men for packers or weavers, and hemmers to finish the job. Lemaitre Demeestere companie win lot of awards at international and universal exhibitions, which is mentioned on the headers of old bills. Lemaitre Demeestere is a recognized leader in the profession at the time. Factory became operational in 1912. The rooms are so large that is possible to put one hundred looms on the same level.

Paul and Joseph Lemaitre join their father in 1910. Auction houses are created in Lille and Paris. An upholstery weaving activity is added to the production. This results in the acquisition and expansion of a jute weaving at 216, Rue de la Lys (current corporate headquarters).

In 1910 the town of Halluin undergoing lot of strikes during which the Lemaitre Demeestere’s doors are forced.

Then, Mr. Paul Lemaitre – Boutry (called “Monsieur Paul “) lead the company and manages two factory with 3 directors.
In 1953, Lemaitre demeestere becomes the property of the Segards adn focus its offer on uniform, clothing and ticking.

During the 1914-1918 war , the factory of Rue du Moulin was requisitioned by the German army and turned into Kommandantur and civil prison. Those of the Rue de la Lys is looted. After the signing of the armistice, rehabilitation requires many months. The first factory to restart production is that of the Rue de la Lys, at the end of 1919.

But the recovery is not easy : french customers rather buy foreign competition. Then, Lemaitre-Demeestere uses the combed and carded cotton in the manufacture of linen and it is a success. Lower prices, while maintaining quality and increasing production (through looms English Atterton) give to the company a prominent place in the market.

In 1926 an economic crisis appears with periods of partial and total unemployment.

In 1929 other strikes broke and last 7 months. The factory in the Rue du Moulin works with Flemish workers who stay and eat in the factory during the period of the strike. At the end of the conflict, the recovery is difficult owing to the global crisis.

For the company’s centenary , the first automatic looms appear and the weaver must supervise 16 looms.

Important linen exports are sent to the United States and Argentina. The teamwork of the two-eight is decided and accepted by staff. There is a stable cycle where parents take children in learning and where the family tradition continues.

In 1936 the textile factories working for the army and make uniforms. During the occupation of the Second World War, the factory located in the street of La Lys continues to work partly for France and partly for German army , but the raw material supply is unstable. This situation lasted until 1946.

The postwar period is characterized by a significant recovery in activity and exports. In 1951, difficulties entail the sale of the factory in Rue du Moulin, the purchase was did by Rover campany, a fabricant of washing machines.

Mr Segard enters in the Lemaitre Demeestere’s capital, the total recovery of the factory by Segard companies is effective in 1953. New activities appear : printed cloth table, fantasy upholstery fabric, wall fabric in linen … Some flocked products (including the ” Peau d’ Halluin “) are the worldwide reputation of the company with exports to the USA, Japan, Hong Kong and Europe.

In 1993, Xavier Segard succeeds to his father in hard economic times. He repositionned the company in order to become one of the european specialists in natural fibers fabrics for furnishing and decoration.

Since september 2008, Olivier Ducatillon manages the company and his goal is to export our “savoir faire” in Europe and in the United States.

Lemaitre Demeestere is one of the oldest textile industry of France. She became a reference in the furnishing fabrics industry by associating “savoir-faire”, ability to react quickly and competitiveness. 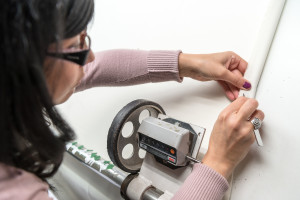 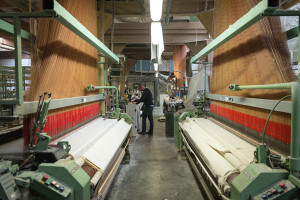 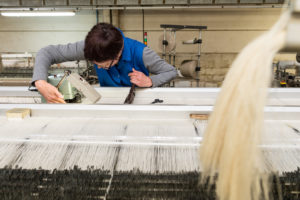